Home Phones How to Spot Spyware on your Smartphone?

How to Spot Spyware on your Smartphone? 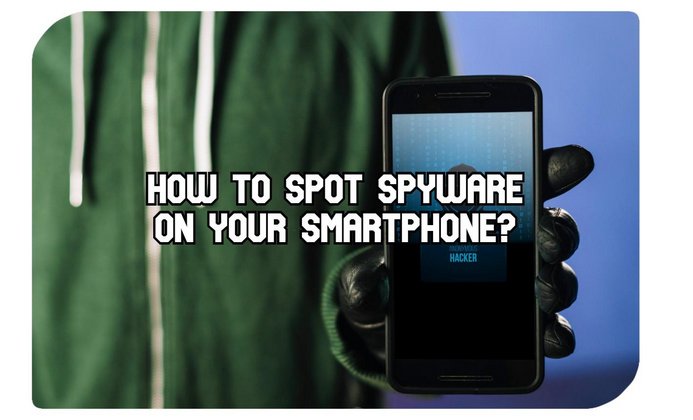 You know what they say about chaos, right? That it comes without knocking.

Something like this happened to me a few days ago.

I was on my usual app-downloading binge when suddenly my phone’s screen went blank. Blank!? Only for a millisecond or so. Things returned to normal almost immediately.

At first, I didn’t think much of it. Who would? No one has the time to care for these little things. But then, majorly bizarre stuff started happening.

Out of it all, the calls shook me the most. First, from a friend in Milwaukee, complaining how I’d publically posted an intimate picture of her—which was in the deep recesses of my phone—on one of the social media channels, without her consent. Then, from my bank, inquiring why I’d transferred THAT much of a significant amount from my own account to an unknown beneficiary. Lastly, from my boss, suspending me for leaking the system’s structure and selling it to the competitor’s party.

I went into shock.

Because there was no way on earth that I’d done any of those things. And that’s when it hit me. I asked a tech-specialist friend of mine to come over and take a look at my smartphone. After inspecting it for some time, he confirmed my suspicion.

I’d accidentally downloaded spyware on my cell phone, which had been tracking and monitoring my private activities, and sending my confidential information to a third party that had hacked my phone and executed all those remarkable feats against me. I was being tapped without my own knowledge, and it threw me into an abyss of despair for quite a long time.

ALSO READ  How to reboot and reset your iPhone or iPad

So, in this post, I would like to forewarn you of the cell phone spyware and the possible damages it can incur. Timing is of absolute essence in this case. If you detect the spyware in the early stages of infection, you can eradicate it right there and prevent any future mishaps.

The following tips will help you with spyware detection. It doesn’t require a special technical know-how, just a keen and observant eye. Read on.

One of the most telling signs indicating spyware on a smartphone is when the phone’s battery takes a sudden dive. Goes from 89% to 25% in half an hour, even though you’ve purchased the device not so long ago, and it had been working fine before. What does this odd behavior signify? That the spyware app is working behind the screen and hogging all the battery juice. I didn’t notice this, maybe you can.

A spyware infected smartphone uses the mobile data ambiguously. If you’ve seen a sudden change in your mobile’s internet history and consumption, going from a usual low to a high peak in a matter of minutes, then consult your ISP immediately and find out who’s behind this surreptitious activity. Following that, reinforce your network against possible intrusion. Some of the best internet providers in the market like Spectrum usually offer a tough-as-nails internet security suite to its customers, for free. By installing that, you can shield your devices and online activity against spyware, firmware, and malware of any sort. When in doubt, you can even contact the customer service anytime, anywhere and get ready assistance before things take a turn for the worse.

So, you call someone from your smartphone and hear a weird beep, an echo or an irregular voice in the background which should not be there? And it has been occurring across every single call that you make? Yes, there’s spyware on your cell phone. It may be a network issue, but you can test that by calling in the same area using a different phone. What basically happens is that the spyware records your calls, which causes the disruption in the first place. It’s a tell-tale sign. Keep an eye out for it.

It’s just like a scene out of a sci-fi movie. You receive these text messages having creepy numbered codes that make no sense to you whatsoever, yet are commands given by the spying party to the spying software hiding in your phone to start wreaking havoc there. If you’ve been receiving such messages for some time now, yes, you’ve been targeted. Get your phone checked ASAP!

Thus, with the help of these and other detection tips, you can catch the spyware in its early stages and uproot it right there.