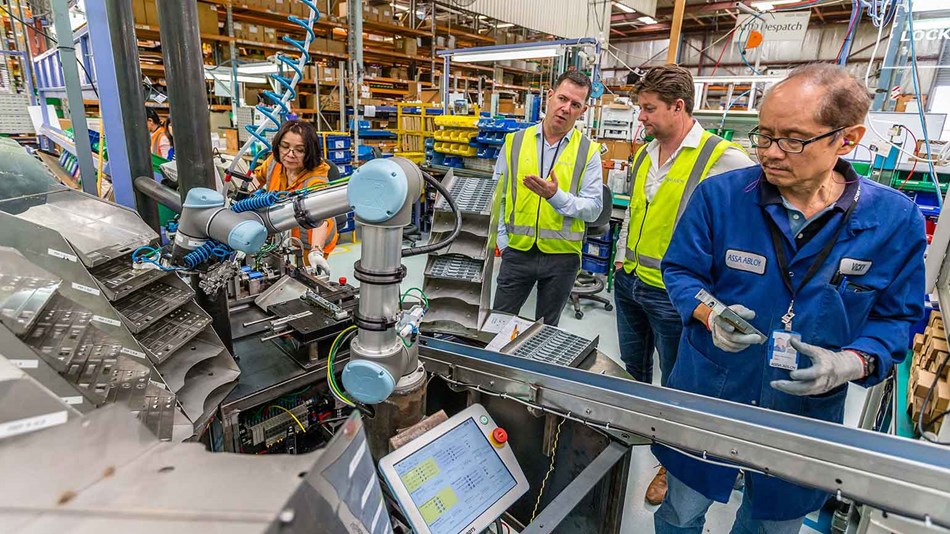 Of all the innovative industrial robot technologies, robot machine tending is perhaps the most disruptive and much talked about one. The term robot machine tending can be confusing to some, especially since manufacturers, tend to advertise its functions differently.
What exactly is robot tending? How does it work, and what potential does it have for industrial operations in terms of output, human labor, and ROI?

What Is Robot Machine Tending?

As the name suggests, robot machine tending refers to the use of robots instead of humans to operate various machines in a factory or machine shop. Robot machine tending takes the human out of the equation by handling all the materials as a human could and placing them at precise intervals, angles and proportion depending on the production process in question.
Robot machine tending is a relatively new concept but currently enjoying a lot of interest and adoptions in big and small plants where it’s possible to delegate tasks to a robot. Robot machine tending couldn’t have come at a better time for most manufacturers due to perennial staffing shortages.
At the same time, western companies dealing in manufacturing can now manage to do ROI-positive production with the high labor costs out of the way.

How does Robot Machine Tending work?

Robot machine tending has been made possible by the advent of better equipped industrial robot arms that can perform complex material handling. Depending on the application in question, these robots can use a set of sensors such as optical or machine vision to detect materials and move them onto a machine as a human would do.
A great example one can use to illustrate how robot machining works is the way a factory worker could carry a spare part and place it under a welding machine. The robot would then hold it in the right place and for the right time interval until the welding process has been completed. It would then transfer the material to the next stage and repeat the process with another spare part.
It’s also possible to have a single robot do a set of related tasks repeatedly just like a human would do, For instance, after welding the spare part in the welding machine, it would transfer it to another machine for inspection or molding and move it to another machine for painting purposes. However, the more complex the robot machine tending tasks involved, the more expensive the industrial robots would be.

Robot machine tending is a relatively nascent technology. Still, its current application shows immense potential for the future of production. For instance, there are inspiring examples of automotive assembly plants in Germany, such as BMW, that have managed to cut labor costs by over 60% by using highly sophisticated mobile robots for machine tending.
With the introduction of cheap but highly versatile robot arms used in the SME sector, it is now much easier for small businesses to deploy their robot machine tending cells on an ROI-positive budget.
Collaborative robot arms are famed for their immense abilities in terms of task versatility and ease of deployment. A small machine shop can now cut their labor requirements significantly by delegating some of their production processes to a robot programmed to do machine tending. All that is required to make this possible is the right end of arm tooling (mostly grippers of different types) and the appropriate robot machine tending cell or workstation.

There are millions of fans worldwide of all types of animation art, also referred to as Anime.
ALSO READ  The Future of Photography and Hacks You Need to Know in 2020 and Beyond
The fact is...
Read more