by Bella Jack
in Business
0

As the original cryptocurrency, bitcoin price history (BTC) is becoming an increasingly popular financial tool. Many companies and consumers utilize it as a means of trade, while others even invest to take advantage of the Bitcoin price. Bitcoin is a decentralized cryptocurrency.

It was originally made available online in 2009, and since then, it’s been increasingly popular. Bitcoin price history runs on a peer-to-peer network that lets users perform digital financial transactions without the need for a financial institution to serve as a middleman. Even though it wasn’t the first digital currency on the internet, Bitcoin was the first to use a blockchain to safeguard and record transactions.

The price changes of bitcoin price history can indicate both investor excitement and dissatisfaction with its promise. Satoshi Nakamoto, Bitcoin’s inventor, devised it for use as a medium for daily transactions and as a tool to avoid the traditional banking system following the 2008 financial disaster. To date, Bitcoin hasn’t been widely accepted as a means for exchanging goods or services, but there has been some progress in the narrative about it serving as an inflation hedge.

There is considerable uncertainty regarding who should gain credit for developing Bitcoin. The idea was initially stated in a white paper issued under the pseudonym, Satoshi Nakamoto. As of this writing, the real identity of the writer is still unknown. It is not even clear if Satoshi Nakamoto is a human being or a group of individuals. The white paper, issued in October 2008, details how peer-to-peer digital money would function.

The author contended that transactions could be managed in batches and then secured with a cryptographic technique. These batches would be called “blocks,” and they would be linked together in a chain. This is where the word “blockchain” originates from. The currency was then launched in January 2009, when Nakamoto mined the first block of Bitcoin. While Nakamoto is credited with inventing and launching Bitcoin, several others have worked to improve the code and increase security. The Bitcoin source code is currently housed on GitHub and lists the names of many of the key contributors who have been maintaining and updating the code.

How much Bitcoin is there?

A new Bitcoin is created by a process known as “mining.” As transactions occur, they are handled by the miners, who package them into blocks. This helps to keep the network running, and as compensation for using their computing power, they are awarded Bitcoin. At the time of its launch, the reward was 50 Bitcoin per block processed. However, the award is cut in half for every 210,000 blocks mined. Users also do not have to worry about the Bitcoin price getting overly diluted by too many coins being released on the market. Not only does it take time and effort to mine Bitcoin, but the software also has a limit of 21,000,000 coins. That means that the maximum number of Bitcoins that can exist is capped at 21,000,000. At the time of writing, there are just over 18.7 million BTC in circulation.

Where to buy Bitcoin

As the most popular cryptocurrency, Bitcoin can be bought on a number of exchanges. You can usually buy Bitcoin with USD, or you can use other world currencies or alternative cryptocurrencies to exchange for Bitcoin. Some of the most popular exchanges include Coinbase, Binance, Kraken, Bitfinex, Huobi, KuCoin, and OKEx. Different kinds of exchange may cater to the needs of different types of users. It is recommended that users research different exchanges before signing up and buying Bitcoin. 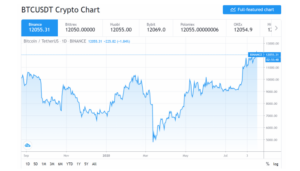 Though this new store may prove to contain more merit, the price variations of the past mostly arose from regular investors and traders’ wagering on an ever-increasing price without much footing in reason or facts. But Bitcoin’s price narrative has shifted in recent months. After the maturation of cryptocurrency markets, institutional investors have begun to trickle in, and regulatory authorities are developing regulations expressly for them.

Despite the fact that Bitcoin’s price is still unpredictable, it is now influenced by a variety of variables inside the mainstream economy rather than the impact of speculators seeking rapid profits through momentum trades.

Since it was initially presented to the public more than a decade ago, Bitcoin has had a choppy and unpredictable trading history. Bitcoin’s price has witnessed many bubbles during its brief lifetime. As Bitcoin has evolved into an asset class, so have the elements that influence its price. The narrative surrounding Bitcoin has moved from being a medium of exchange to being a store of value as a hedge against inflation and uncertainty regarding the U.S. dollar’s future purchasing power.

The Fluctuations of the Bitcoin Price History

For the most part, Bitcoin investors have had a turbulent ride over the last nearly 13 years. Beyond the daily price fluctuations, where double-digit rises and declines are not unusual, they have had to deal with other difficulties afflicting the ecosystem, from countless scammers to a lack of regulation that further feeds its volatile nature. In spite of all this, there are occasions when the cryptocurrency’s price movements have outrun even their normally turbulent swings, culminating in large price bubbles. 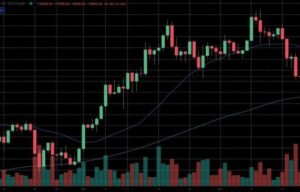 Bitcoin’s novelty as an asset class implies that its tale is continually evolving. Its price has generally matched the standard Gartner Enthusiasm Cycle of peaks owing to hype about its potential and troughs of disillusionment that result in collapses.

Speculative bubbles are vital in the cycle’s structure because they generate money and propel the creation of new technology. As a result, every upswing and downswing in the price of Bitcoin chart has brought attention to the flaws in its ecosystem and offered fresh investment dollars for its development. Previous research on Bitcoin’s price suggested that the price of the cryptocurrency was linked to its velocity, or how frequently it was used in everyday transactions and trades. However, crypto trading volumes are a fraction of their traditional counterparts, and Bitcoin never truly took off as a daily transaction method.

Early Bitcoin trading was influenced by a variety of factors 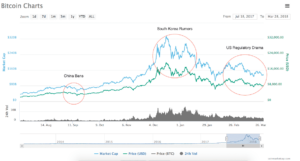 Liquidity in the Bitcoin chart market was limited in the early days, and there were relatively few investors. When investors booked profits or when an adverse industry development, such as a ban on cryptocurrency exchanges, was announced, this state of affairs resulted in large price fluctuations.

The emergence and collapse of cryptocurrency exchanges, which handled substantial stashes of bitcoin, also affected Bitcoin’s price trend. Events at Mt. Gox, one of the earliest crypto exchanges in the world, had a significant role in the volatile price fluctuations of Bitcoin in 2014.

For example, the price fell by 32% from $850 to $580 after the exchange claimed to have lost 850,000 bitcoins in a hack and declared bankruptcy in February 2014. Mt. Gox’s stock price had already fallen by 29% in December 2013 due to concerns about the company’s shoddy management and insufficient security measures.

Bitcoin’s early price was also affected by the currency’s acceptance by large-scale online retailers: In January 2014, after online retailer Overstock announced that it would begin accepting Bitcoin for sales, its price surpassed the $1,000 mark. As ASIC mining operations gained traction, Bitcoin’s price began to track its marginal cost of production, partly because of the high cost of electricity required to power mining equipment. There has been a steady increase in energy use to keep up with the increasing complexity of mining Bitcoin as the network has grown. 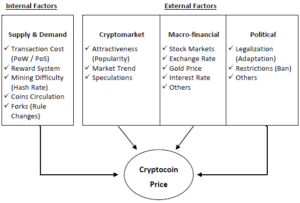 The number and variety of factors influencing the price of Bitcoin have grown exponentially in recent years. Starting in 2017, when Bitcoin attracted popular attention, regulatory changes have had an outsized influence on its price since they widened the cryptocurrency’s reach. Each regulatory announcement raises or lowers Bitcoin values, depending on whether it is good or negative. Interest from institutional investors has also cast an ever-lengthening shadow over Bitcoin’s price workings.

ALSO READ  A quick guide to selling your car

In the past 10 years, Bitcoin has flipped away from individual investors and become an appealing asset class for institutional investors. This is regarded as a beneficial development since it introduces additional liquidity into the ecosystem and tamps down volatility. The cryptocurrency’s most recent bounce in 2020 happened after numerous well-known personalities in finance spoke approvingly of its potential to evolve as a store of value to hedge against inflation from increased government spending during the epidemic.

The adoption of Bitcoin for treasury management by enterprises further enhanced its price in 2020. MicroStrategy Inc. (MSTR) and Square Inc. (SQ) have both declared commitments to utilize Bitcoin instead of cash as part of their corporate treasuries. The third key factor affecting the price of Bitcoin is the development of the industry.

Because of Bitcoin’s interdisciplinary foundations spanning both technology and finance, these advancements are relevant to both fields. For example, reports of the opening of Bitcoin futures trading at the Chicago Mercantile Exchange (CME) and the Cboe Options Exchange (CBOE) were welcomed with a price jump at crypto exchanges and helped bring Bitcoin’s priced closer to the $20,000 level in 2017.

Bitcoin halving occurrences, in which the total number of bitcoin accessible on the market drops owing to a reduction in miner payouts because of an algorithmic adjustment, have also accelerated price hikes. There has been an almost threefold increase in the price of one Bitcoin since its halving in May 2020. Previous price halving events in 2012 and 2016 resulted in price increases of over 8,000% and 600%, respectively. Among several factors, the halving of the incentive granted to miners that also doubles the asset’s stock-to-flow ratio seems to have a substantial influence on Bitcoin’s price.

Finally, the price of Bitcoin may be predicted by looking at the state of the economy. Since its conception, the cryptocurrency has positioned itself as a transnational hedge against local economic volatility and government-controlled fiat money. According to sources, there is a time of greater economic activity on Bitcoin’s blockchain after an economy faces road bumps owing to government policies.

Bitcoin as a medium of exchange 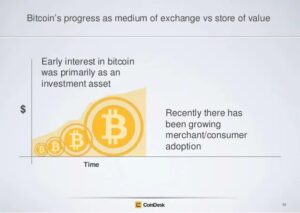 The usage of Bitcoin as a medium of exchange and a repository of wealth has skyrocketed in countries like Venezuela, where the currency has faced hyperinflation. This has prompted observers to conclude that the cryptocurrency’s price gains and global economic upheaval are related. As an example, when the Chinese government imposed capital limits, the price of Bitcoin rose. Global macroeconomic turmoil was caused by the bitcoin price history 2020 pandemic shutdown, which sparked a record spike in Bitcoin’s price.

At what price did bitcoin start trading?

When bitcoin was initially released in 2009, it had a value of exactly 0 dollars. It was originally traded for free between early users.

What is the highest price Bitcoin has reached?

How much will a single bitcoin be worth in 2030? bitcoin price prediction?

It depends on the person making the prediction as to how much Bitcoin price prediction will be worth in the future. According to Jeremy Liew, a partner at Lightspeed Venture Partners, Bitcoin might reach $500,000 per coin by 2030. According to the June 2020 Crypto Research Report, the cryptocurrency might soar beyond $397,004 by 2030. Others, on the other hand, believe that Bitcoin is only a speculative bubble and that its value will plummet dramatically over the next decade.

The 9 Best Gmelius Alternatives for Email Collaboration In 2022